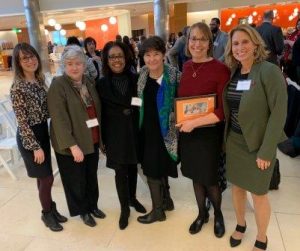 November 2018… Healthy NewsWorks and nine other Philadelphia-area nonprofit organizations have been honored with the prestigious Glaxo SmithKline (GSK) Impact Award. The nonprofits were awarded $40,000 each in recognition of their contributions to building a healthier Philadelphia region.

The awards, which were presented in partnership with The Philadelphia Foundation, were announced November 15 during a ceremony at GSK’s Philadelphia Navy Yard site.

In accepting the award, Healthy NewsWorks Executive Director Marian Uhlman noted that the program’s first health-focused school newspaper was published 15 years ago this month, and said its 500th newspaper will be published sometime next spring.

“We’re thrilled beyond words and so very grateful that GSK and The Philadelphia Foundation have chosen us as a GSK Impact Award recipient,” she said. “The award will help us expand and deepen Healthy NewsWorks’ impact in the community.”

She credited the thousands of kids who have learned and written about health through the program and the heartfelt support it’s received from teachers, volunteers, community members, and others. “It’s been both humbling and magical to watch Healthy NewsWorks evolve and thrive because of this confluence of ideas, hard work, passion, and commitment.”

“We’re proud to work with GSK on both these Impact Awards and on the GSK Opportunity Scholarships. These programs demonstrate GSK’s exemplary philanthropic commitment to the region,” said Pedro A. Ramos, president and chief executive officer of The Philadelphia Foundation. “The Impact awardees have strong community connections and we, like GSK, value their effectiveness in contributing to the health of the community.”

In addition to Healthy NewsWorks, the Philadelphia-area organizations receiving GSK Impact Awards were:

Another group of 10 nonprofits in North Carolina received GSK Impact Awards on November 13.

The award recipients were selected by a panel of local and national community leaders through a competitive process. The nonprofits needed to demonstrate innovative, measured and sustainable approaches to addressing at least one of the following six health factors:

The event also featured videos of the awardees. Click here to view the videos via YouTube (the Healthy NewsWorks portion starts at 03:50).

Previous Post They research. They write. They proofread!
Next Post Getting the facts on heart health in grades K-2