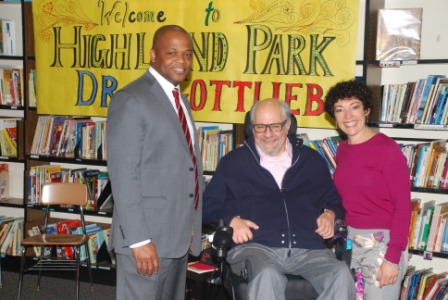 Preparing for a big interview at Highland Park

January 2015…Psychologist and radio personality Dan Gottlieb is a celebrity, but that didn’t stop the student journalists in Leslie Isaacs’ classroom from asking challenging questions.

“When you were little, were you bullied?” one student asked Dr. Gottleib.

“Yes, I was in middle school, and the kids took my pants and ran away,” Dr. Gottlieb answered. “I’ll never forget that, mostly because it was cold. . . . But yeah, I got bullied a lot and it hurt me.”

The questions were part of a press conference organized for the Healthy Hawk newspaper at Highland Park Elementary school in Upper Darby, Pa., in December 2014. The children in Dr. Isaacs’ classroom had prepared questions in advance, but as the press conference went on, the children listened to what Dr. Gottlieb said and came up with several follow-up questions.

“When they came up to the microphone, I didn’t know what they were going to ask, but it was impressive.  I felt like I was sitting in a press room,” said Dr. Isaacs, a fourth grade teacher who is in her first year as the Healthy Hawk‘s faculty advisor.

Their story based on the interview with Dr. Gottlieb will be included in Healthy NewsWorks’ book, Leading Healthy Change In our Communities 2015, to be published in May.

From there, the students came up with a lot of their own ideas of how to work and behave like professional journalists. They even began dressing up—the boys in suits and ties and the girls in dresses or nice pants—for press conferences and other newspaper events.

The student journalists have researched and written about a wide variety of health-related topics, Dr. Isaacs said, including bike safety, bullying, and what teachers do for exercise.

They also had to learn to introduce themselves to sources when they wanted to ask questions. Now, when someone new comes into the classroom, the students walk up, shake hands with the person, and exchange names.

“These kids have gained such confidence, not only academically but socially,” Dr. Isaacs said. “The program encompasses journalism, research, writing—the whole process of what it’s like to work for a newspaper.”